SAGA – or how we learned to read funky dice

This game this week was learning the basics of SAGA from Gripping Beast in England, or from Architects of War in the US.  3 of the group that made it Monday night had played before so that helped a lot learning the basics.  Of the 7 members who were there, 6 brought figures for the game. I was the lone “don’t have any” guy.  Gary and Steve brought buildings, we used Steve’s for some terrain, but they were just for show.  I was very impressed by Gary’s buildings from 4 Ground also from the UK. Not too bad a price for them pre-assembled either.
SAGA uses a unique method of activation. You get X number of dice to roll per turn, this amount is determined by the type and amount of troops you have on the table. Roll the dice and place them on the battle board that is for you troop faction. Each faction has unique traits.  It gives a better feel for the different factions much like the traits in Bolt Action rules, only better. 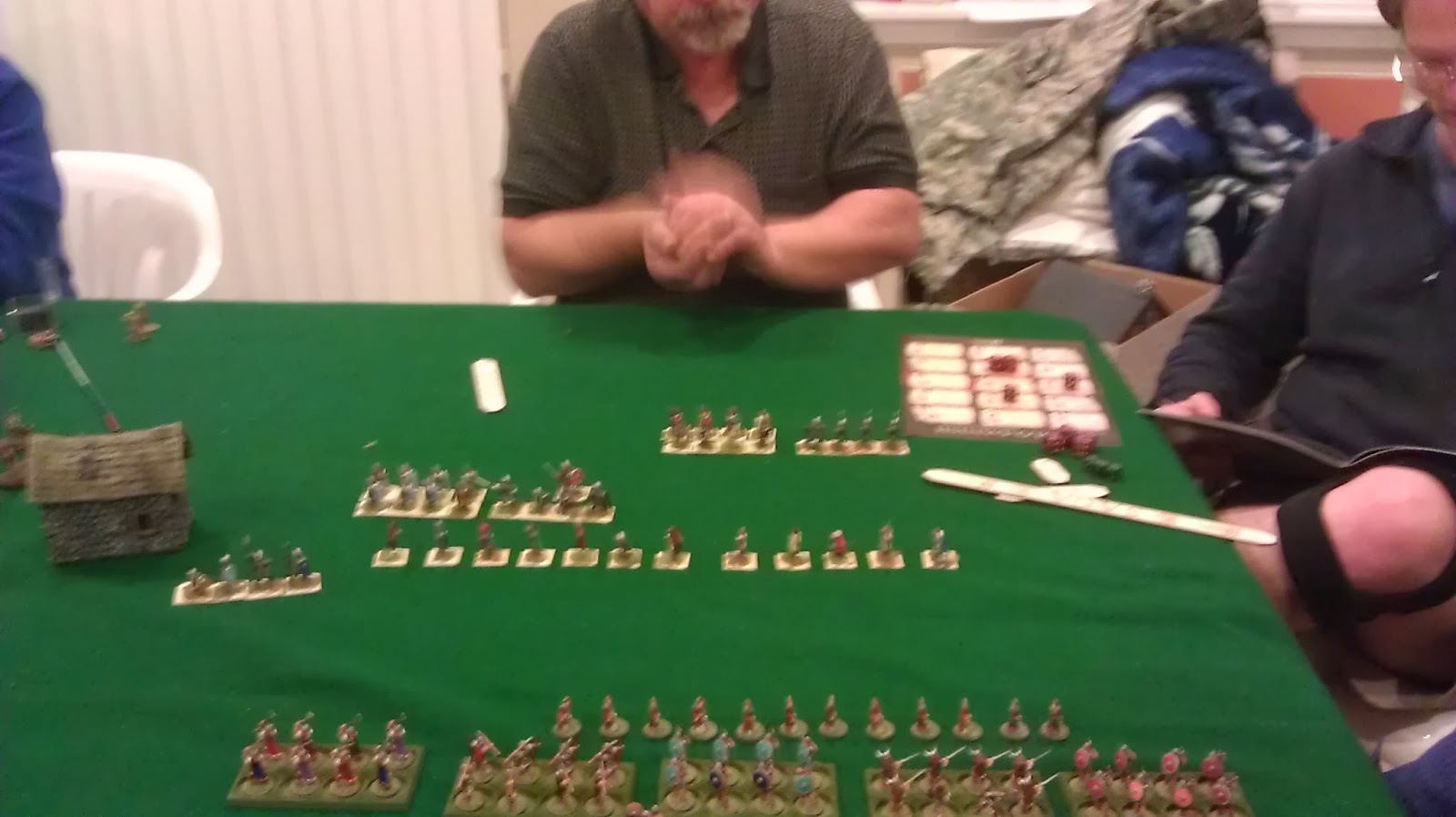 Steve warming up the dice before he stomped Keith and I. Murphy was coaching the game.

The key seems to be good planning and good dice rolling. That is a  bit obvious but hard to do on the first game when you are learning the system.  Step one figure out how many dice you can roll.  If I remember correctly, 2 for the warlord and one for the other unit except the levy troops.  Then subtract the ones that might be left on the battle board from previous turns. Then comes the challenge of planning. Matching up what you want your troops to do and match that up to what your dice will let you do on the battle board.
About the dice, SAGA uses custom D6 (very expensive) with symbols from the different faction’s written language (I think). We used battle boards that had been translated into normal D6 numbers, thank goodness.  Different rolls can do different things. For example any roll that is 1 to 6 can be used to activate your warlord (general) or elite troops. A roll of 1 to 3 and 6 can activate your warriors, where 4 to 6 can activate the levies. Then you get to the different traits. Some are faction only but many are the same on all the boards.   One I tried at the end of the game with the Vikings was Valhalla. Put the correctly rolled die in the box. Activate a unit, move it into combat (this takes an activation die first) then play the Valhalla box (remove the die from that box). The box says something like “Remove 3 figures and get 3 dice for each one in attack”.  That unit of warriors went from 8 to 5 figures and I got roll 14 attack dice in that roll.  Alas Steve rolled his 8+2 dice ( his bonuses of the his board) for his elite troops and got 8 hits, I was able to get 4 saves but one man units run away. I only rolled one 6 on my attack and my entire unit was lost in that combat. 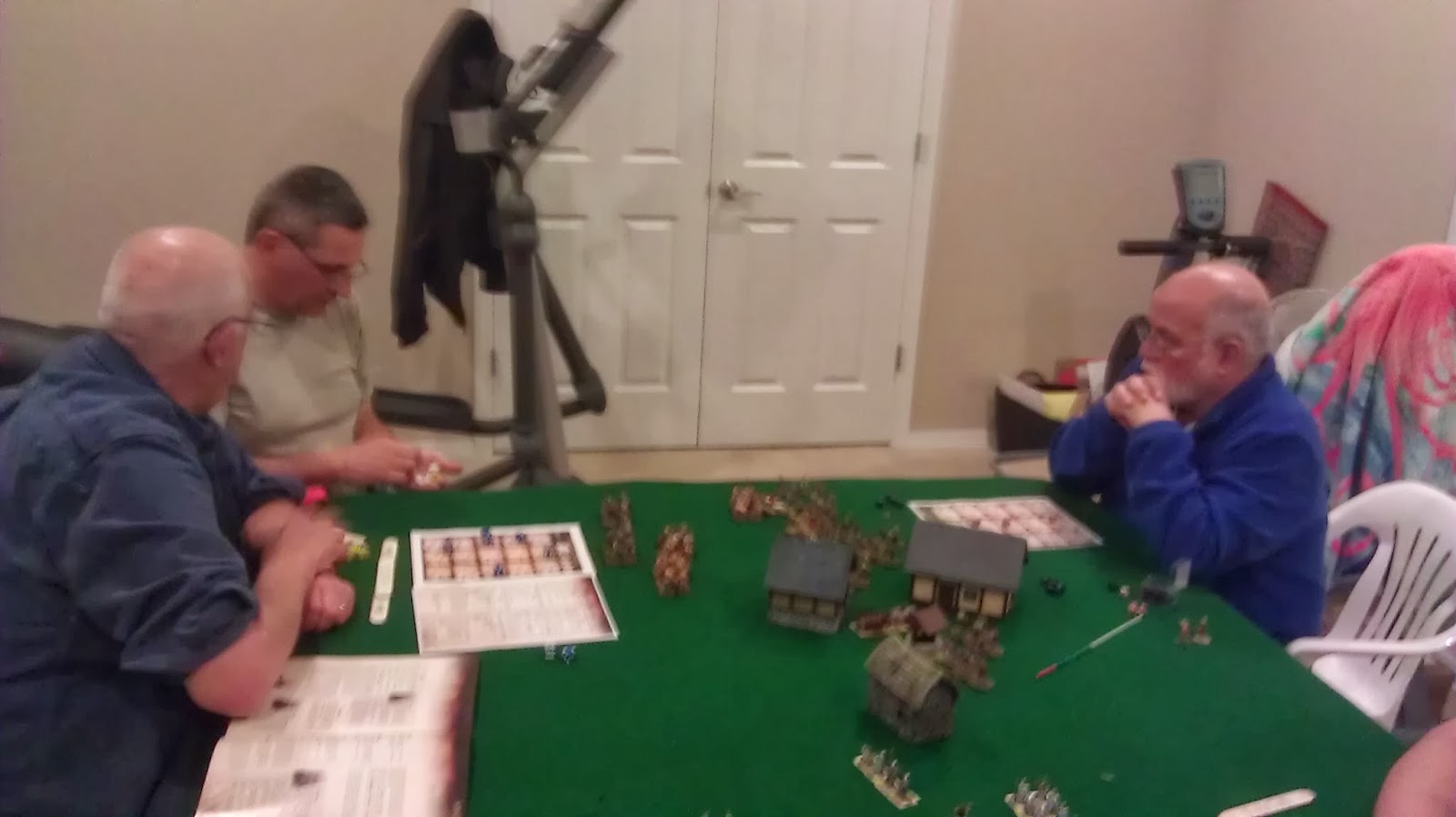 Bruce, Michael and Gary the other SAGA game.

Bruce was comparing it to DBA with the different flavors of things each faction can do. I think he has a very good point that you should play only one or 2 different armies at first instead of trying them all. SAGA will be back, there are more than enough figures and the players seem to enjoy it.
Posted by Dale at 1:22 PM